Although we’ve planned for hiroyuki to talk to ZUN, I guess he won’t be arriving on time. Heh.

He should be heading our way soon, but we’ll have to get started without him. Since this is ZUN we’re talking about, we can’t do anything without a toast first*. Although I’ll be having tea, we have provided ZUN with a good selection of beers.

*ZUN likes to drink beer during interviews, chats, and internet streams, and this has become part of his persona.

A Childhood of Nothing but Video Games

First of all, let’s go into the nitty-gritty of your background. What kind of child were you when you were little?

ZUN:
I was born in the village of Hakuba in Nagano Prefecture. I was the kind of kid who enjoyed playing video games and collecting bugs.

At what age did you find yourself enjoying video games?

So, this was right before the Japanese release of the Famicom system (known as the Nintendo Entertainment System in the USA).

ZUN:
Before that console came out, I was very into the Game & Watch System*. My childhood home was also a cafe, so there were many arcade cabinets to play with too. There were also many ski resorts in Hakuba, so many hotels were outfitted to the brim with these cabinets.

What were the game titles that stuck with you from this time?

ZUN:
This was a bit after, but I loved this arcade game called Sonson*. The music in it was pretty good.

When it comes to the Game and Watch specifically, I remember playing this game where you had to kick a snake falling from a waterfall in order to protect the people taking a bath below (Editor’s Note: We believe he’s referring to the Epoch Co. game King Kong: Jungle**). I lost the battery cover early on, so I had to hold the battery in place while playing the game. If my finger ever slipped, the game would turn off, haha.

While you were playing video games, did you also go into the mountains to catch bugs?

ZUN:
I lived in the countryside, so there’s no need to climb the hills, haha. The bugs were just outside.

Besides video games and bugs, did you have any other hobbies? Did you watch anime or read manga, for example?

ZUN:
I rarely watched TV and I didn’t read manga much either, even though I lived in a cafe and there were plenty of manga to read. I also didn’t enjoy sports, so I just played video games all the time instead.

When you entered middle school — which should be about the time you start figuring out your identity as a person — did you find anything growing up that you’ve come to adore?

ZUN:
You could say, middle school was the prime of my gaming days, haha. That’s probably the time I loved video games the most. The Super Famicom (SNES in the USA) had just come out when I was in middle school, so my friends and I were extremely excited about it.

Did you get together after school to have fun?

ZUN:
While we did just that, we mostly lent Final Fantasy and Dragon Quest to each other and cleared them in turn. I must’ve played a lot of RPGs during this period. Like Final Fantasy IV*. 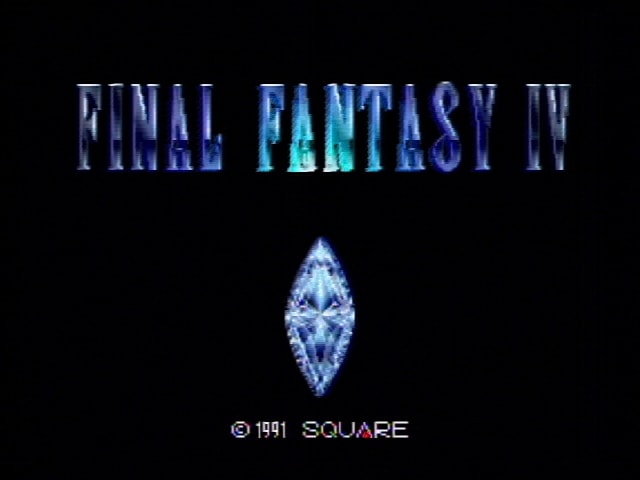 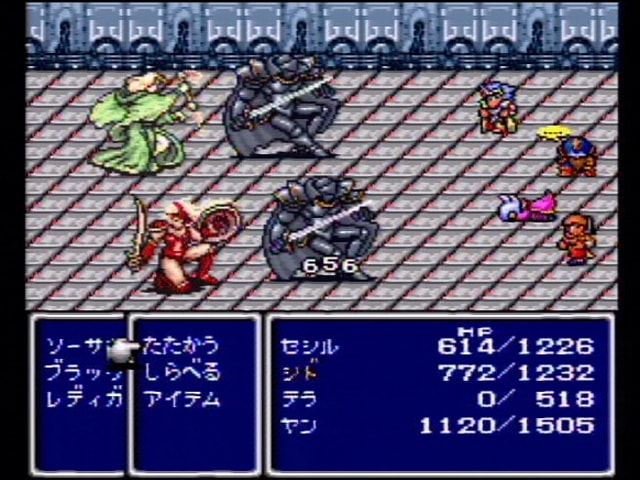 What about shoot em’ ups?

ZUN:
I was playing Gradius 3 around this time. Although the arcade version was difficult, the Super Famicom version was easier to play.

I’ve loved shoot ‘em ups ever since elementary school. Whether it was in arcades or on the Famicom, the difficulty of the genre remains high. Once in a while, however, I’d find people who were old enough to be in college playing them in the arcades. I’d be struck with admiration and think to myself, “Ah, they’re further ahead than me!” 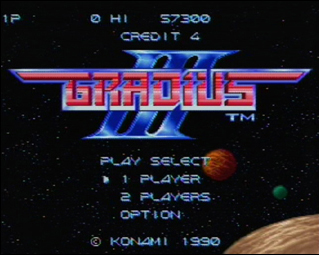 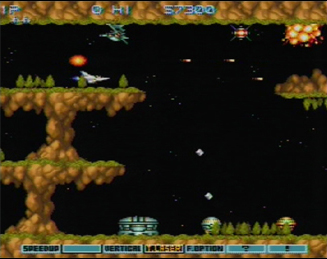 *Gradius 3
From the long-running series of the same name, Gradius 3 is one of greatest shoot em’ ups from 1998. (Photo Source: KONAMI)

Why Worry About Exams When You Can Play Fighting Games?

So, let’s talk about your time at high school.

ZUN:
When I entered high school, I became obsessed with fighting games this time around, haha.

Your childhood was indeed nothing but video games!

ZUN:
In my third year of high school, I played tons of fighting games. I frequented the arcades and the Super Famicom port of Street Fighter 2 was excellent, so I played a lot of that too. I even managed to get myself a NEO-GEO* as well.

The fact that you bought a NEO-GEO seriously shows your commitment to fighting games. But since you were still in high school, shouldn’t you be worrying about going to university?

ZUN:
While I did go to what was seen as the local prep school, I didn’t consider taking the exams and thus never studied much at all. When people began preparing for university during summer vacation, I was just going to the arcades all by myself.

In the end, I was recommended a university that had chosen to affiliate with my high school to recruit students. That was Tokyo Denki University.

Sidebar 2: The Good Ol' Days in the Arcade (click to expand)

Starting to Develop Games During University

While you were attending Tokyo Denki University, you joined a group that developed computer games. Am I right?

ZUN:
I didn’t really have game dev in mind. I was just thinking to myself, “Wouldn’t it be cool to make games in the future? If there’s a club that’s all about game creation, why shouldn’t I join it?”

After joining, I learned that everyone had a personal computer. In order to keep up with everyone, I ended up buying a PC-9821*.

Does this mean this was your first time ever interacting with a computer?

ZUN:
That was indeed my first time.

When it came to programming, did anyone in the club teach you?

ZUN:
Nope, haha, not at all. I learned everything all by myself.

Anyway, while I did go to a bookstore to buy books on programming, I was surprised to learn there weren’t that many books that taught you how to program games. While I did hear that C* was the best programming language to create games and I did buy an introduction to it, I didn’t understand anything that was written in the book. After all, I didn’t even know how to use a computer yet, haha.

I ended up exploring the nooks and crannies of MS-DOS** and learning the foundations of computing all by myself. In the end, learning to play with C took me the longest.

*C Language
A high-level programming language. Its flexibility and versatility makes C perfect for a wide variety of applications, including games.

** MS-DOS
An operating system for computers released by Microsoft in 1981. Although it originally appeared on IBM machines, the NEC PC-9800 series would also adopt it and spread it throughout Japan.

So you’re just like the game creators from a generation ago who taught themselves how to use the computer. Like the famed creator Yuji Horii*.

*Yuji Horii
Born in Sumoto, Hyogo Prefecture in 1954, Yuji Horii is a freelance writer and game designer whose work has appeared in magazines such as Weekly Shounen Jump. He also created Portopia Serial Murder Case and the Dragon Quest games, and is credited with inventing the visual novel and JRPG genres. He is considered to be one of the most influential Japanese creators in video game history.

ZUN:
I didn’t have internet at home and I had just moved to Tokyo, so I had no friends to rely on and I didn’t even know who to ask in the first place.

Learning by myself was honestly a lot of fun, though. Whenever I tried something, something cool would immediately happen and it became fun to tinker for the sake of it. Like for example, when you’re working on the programming, you start realizing “Wow, the sound’s working!” and “The graphics are showing up!” and it would be even more fun as time went on. If I had some formal learning beforehand, I probably wouldn’t have been that excited. However, since I was teaching myself, anything I was able to get working would make me seriously happy very easily.

This sounds almost like you’re describing a game to me.

ZUN:
Making games is itself like playing a game. When I just started playing with computers in my first year of university, I decided to mess around with them during Golden Week. By the end of the holidays, I was able to make something that almost resembled a game.

ZUN:
Yes. It was messy, admittedly, but I was able to create something through sheer force of will during that time.

Does that mean the first game you ever made was the game you made during your first year of university?

ZUN:
It was more like a practice kind of thing. I’m not sure if I would call it my first game, but I did make a Puyo Puyo clone.

Since this was simply practice, you obviously went for a game that you understood the rules of, right?

ZUN:
It was more like copying by eye. I was into Puyo Puyo around this time, so I just tried to copy the game’s behavior as much as possible. There’s a difference between imitating the appearance and imitating the code, of course, but I did get something similar to how stacks and chain combos work in the original game. There was even a versus mode too.

Ah, right! When it came to making games without knowing how to program, I did create a shooting game with the Dezaemon* engine during middle and high school. 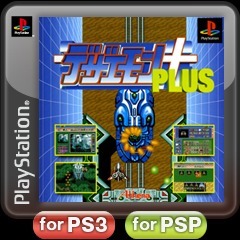 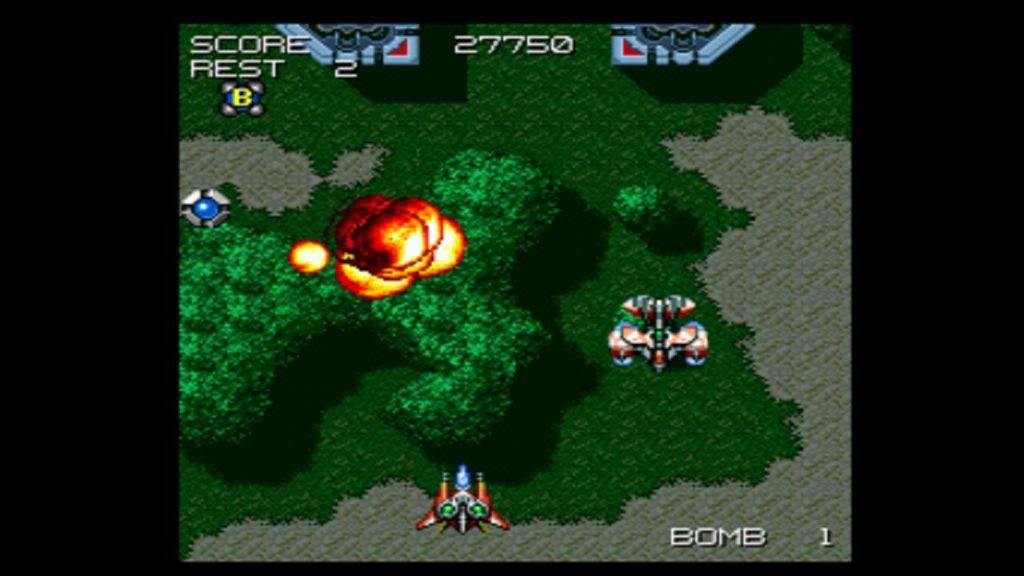 That’s interesting. So before you learned programming in university, you actually had some experience designing shoot em’ up games.

ZUN:
I guess I never had any kind of mental block when it came to game creation. I already understood that all I needed to do was combine illustrations and music while designing games on Dezaemon. It was when I entered university that I learned how to use a computer to code the actual game itself, though. Learning how to program was the real challenge.

To be continued in Part 2…

Wait, did ZUN do nothing but play video games before he entered university? An interview with ZUN, the creator of Touhou Project, about his life (Also, our interviewer hiroyuki was 2 hours late) End

Wait, did ZUN do nothing but play video games before he entered university? An interview with ZUN, the creator of Touhou Project, about his life (Also, our interviewer hiroyuki was 2 hours late) 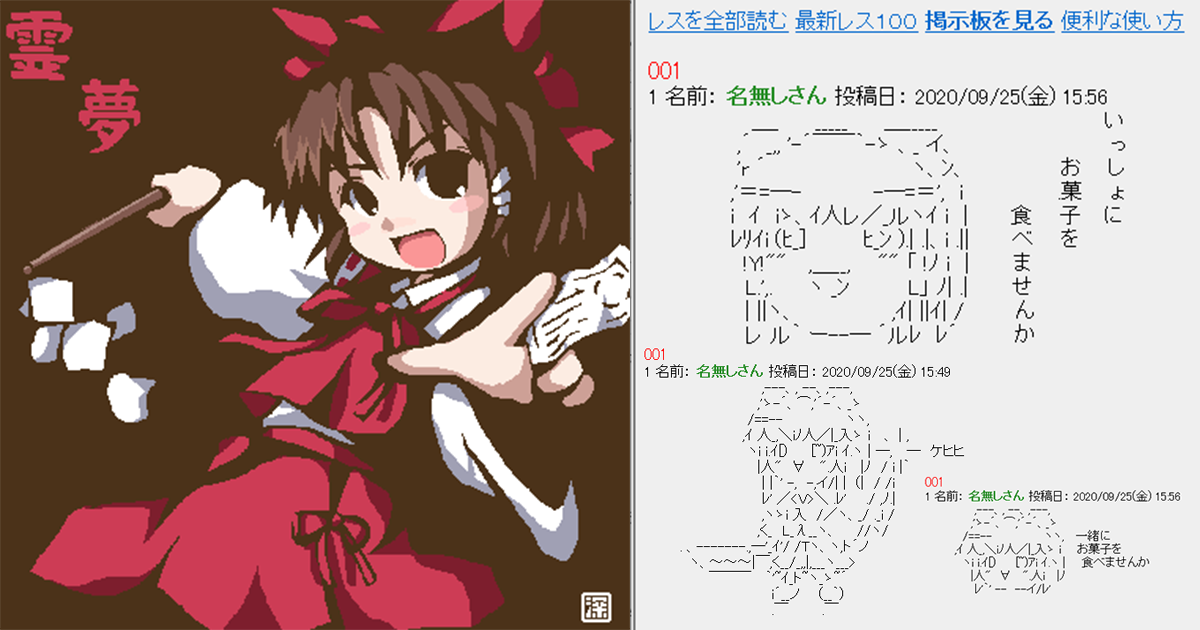 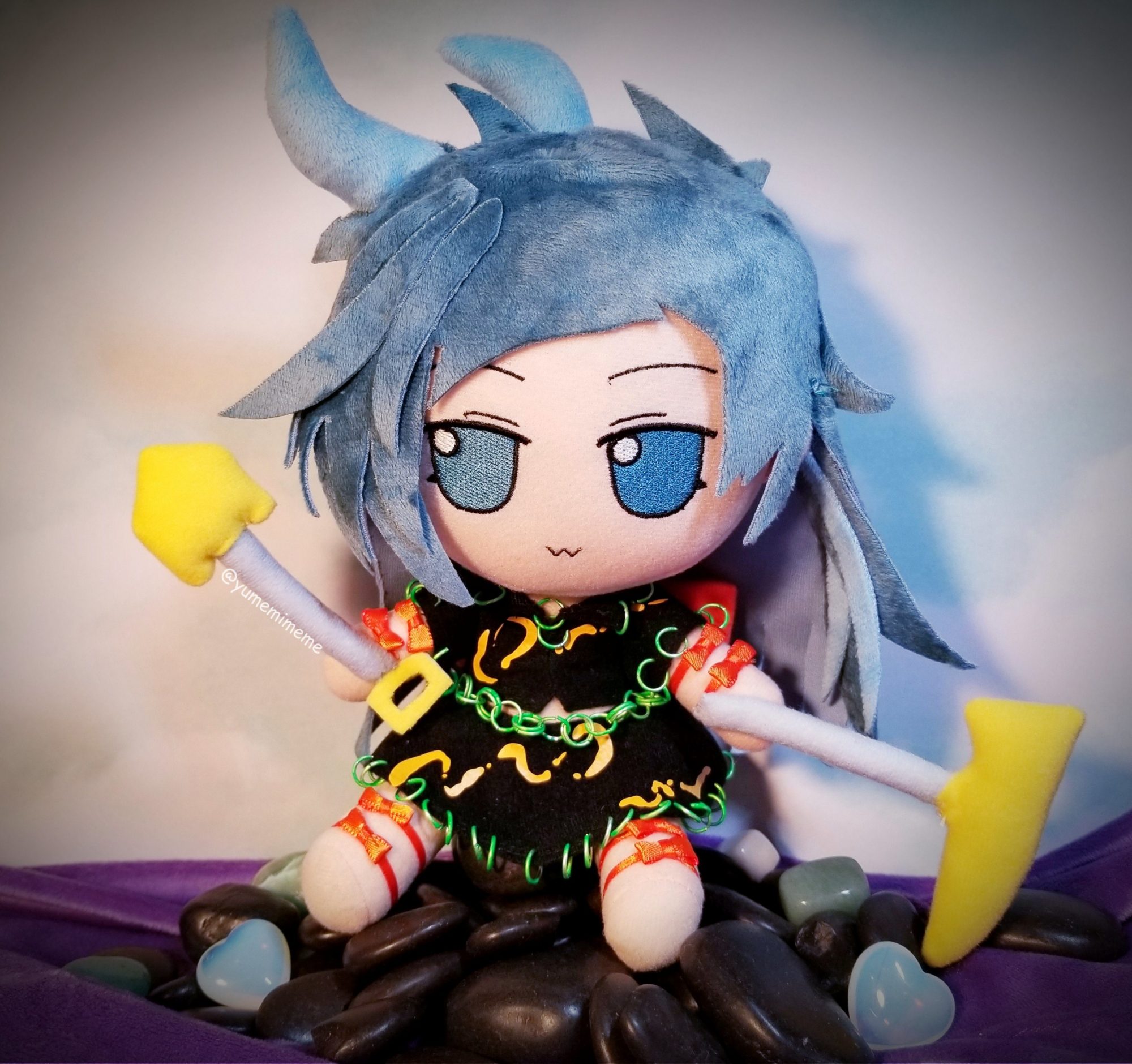 The love for fumos is truly universal. An interview with custom fumo creator and video maker Yumemey 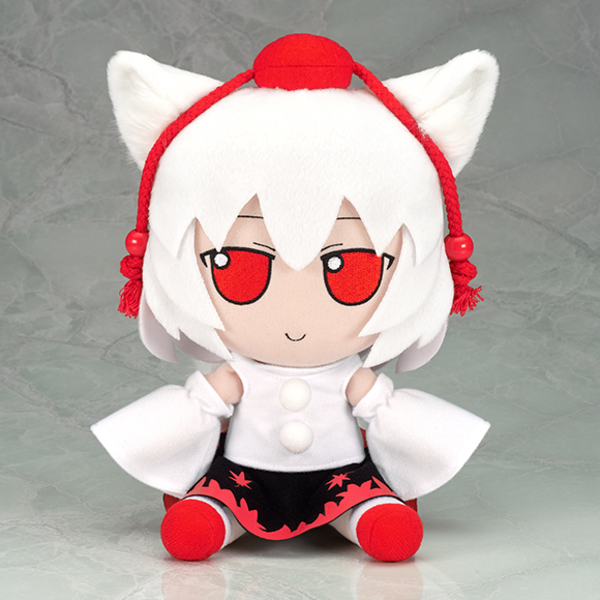 Fumo Fans Crash AmiAmi in the Pursuit of Fumos 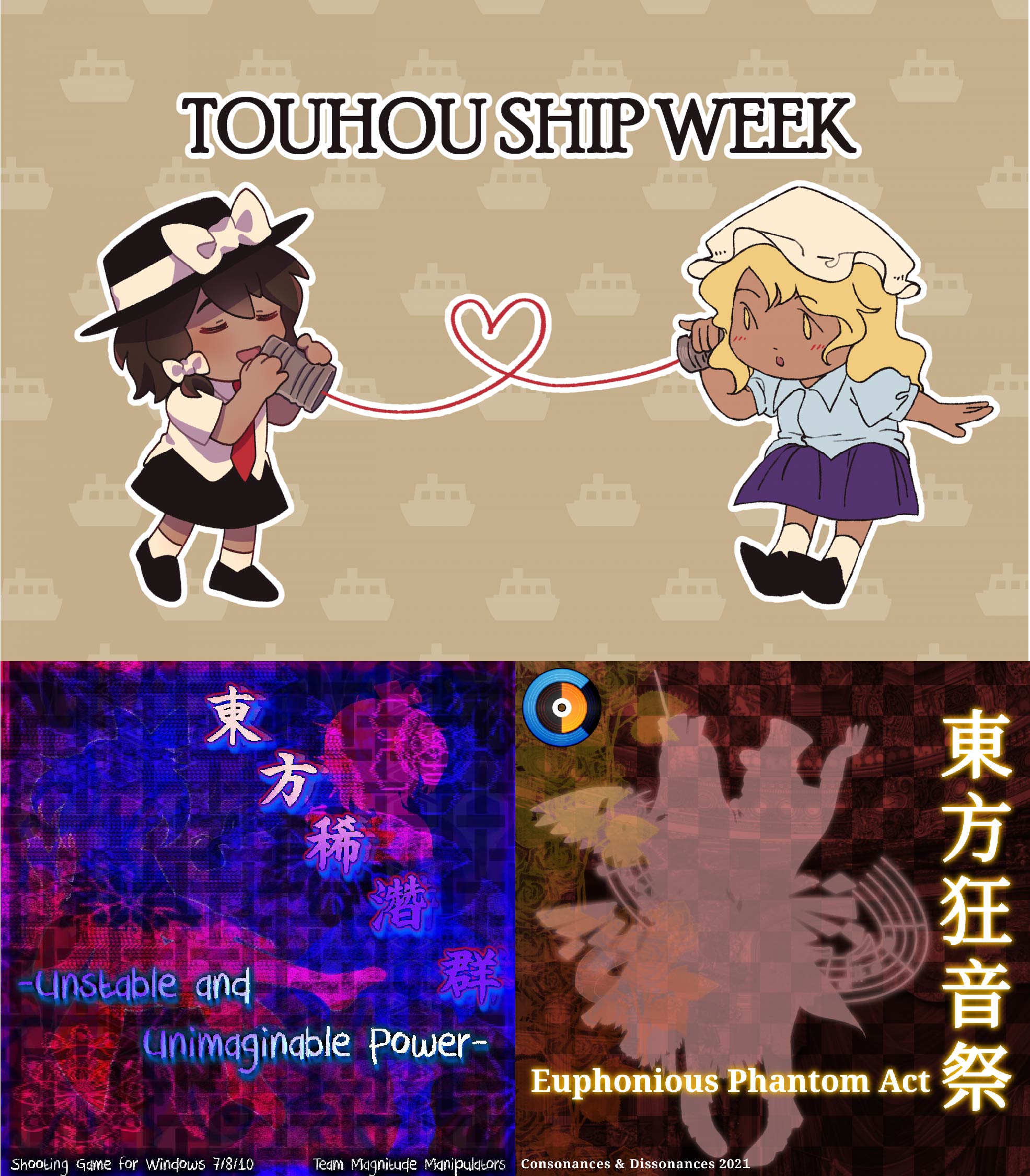